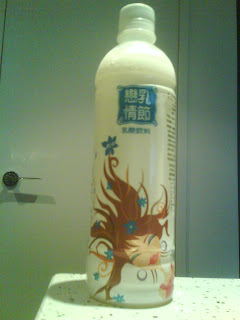 This is a really nice tasting drink! It has a really unique flavour and is unlike anything else I have reviewed before. It's flavour is hard to describe and is not helped by the fact that the bottle has no English text on it.
It's kinda milky, sweet, fruity, musky, amino-like, lactic... and has this pleasant after taste which is best described as a fruity, musky taste.

The same drink has been previously reviewed by asianbev under the name VitaLove, I tend to agree with his observations, but I think I like it even more!
Taste (8.5)