It's impossible to say much about what this beverage may be from its bottle alone. The only English written on it is "Lotte" which is its Korean manufacturer. Otherwise, the 370 ml bottle consists of alternating purple and green flowers and some Korean writing. It's hard to say exactly what this 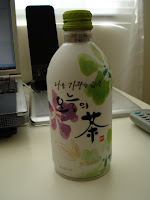 tastes like. It even takes multiple sips to determine if its good or not. It turns out that it's not good. At first sniff, it smells somewhat like the remains of a campfire from the previous night. The first taste that I detected was wood. After many sips, this was the only flavor I could name, but I knew there was another familiar aftertaste much more subtle than the wood flavor. I now believe this to be tea. Annie tried it and at first described it as chocolate with no sugar and then also noted that it tasted like sesame seeds. 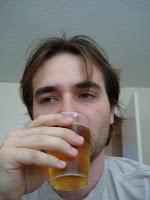 There's a very distinct possibility that this may be Sesame Tea. Its good enough to eat, but I wouldn't drink it if I were you.