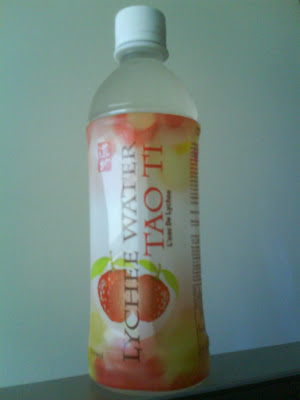 Aah lychee... the fact that they import these things to Australia makes me truly greatful! Lychee is probably a fruit that would automatically get high satisfaction ratings from me, and this drink is no exception.

It's a bit milder than the straight lychee juice I reviewed earlier, and accordingly it's labelled as a lychee water. The mildness has it's advantages, as it makes the drink smoother and easier to consume.

Lychees in general have such a unique taste, and drinking a beverage like this really reminds of their unique nature. The flavour is somewhat reminiscent of a fragrance, the kind you would expect to smell on a bunch of sweet scented flowers, yet you can drink it down.

"Looking for something different, something exotic? Pampers your desires. Opens you up to a brave new world of sensuousness."

I don't know who wrote that, but a "brave new world" based on a single beverage might be taking it a little too far, but who am I to disagree?

The drink is produced by a company called Telford International under the brand name Tao Ti , which distribute from Hong Kong.