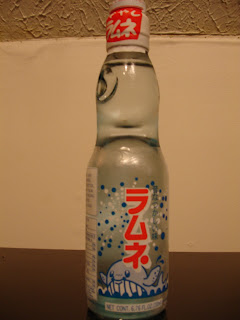 This is one of the most popular drinks in Japan. For that reason, it should be reviewed sooner rather than later. The most interesting part of this beverage is the aesthetic of the bottle. The shape and design is known as the Codd-neck. It functions by a device inside of the cap that forces a marble down into the bottle. Once popular throughout the world, the method of "Codd-necking" is now only utilized by Ramune and a lemon-flavored Indian drink called Banta (no plans to review products from the Indian subcontinent at this time).

The bottle of Ramune that I am reviewing features a very cute drawing of a whale, but, even though fish, shrimp, and seaweed drinks can be found in Japan, fear not. Ramune is not seafood flavored. Basically, it's Sprite - just a clear, sweet, carbonated soda beverage.

While I've purchased original-flavored Ramune several times because of the novelty of the bottle, I've never been particularly impressed by it's generic flavor. There are many other flavors to try, however, including: lemon-lime, pineapple, raspberry, kiwifruit, melon, strawberry, orange, lychee, Blue Hawaii, and peach.

While the act of forcing the marble into the bottle to start the fizz reaction can be a fun activity and something that you can show off to your friends and family who have never seen this kind of bottle before, it can be annoying at times to drink a bottle of Ramune; depending on the angle you hold the bottle as you drink, the marble can block the flow of liquid to your mouth.