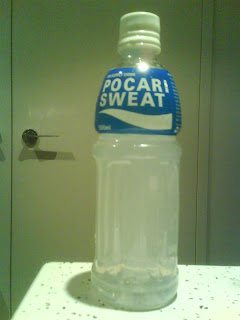 It's gonna be a bit hard to give this drink a full review as I drank it last night after getting home from a big night out, and my memory from that point isn't great.

I've had Pocari Sweat before a few times and it's quite a pleasant drink. It's somewhat akin to sports drinks such as gatorade or similar and I would best describe it's flavour as mild grapefruit without the real bitterness. You could also say that it's a but lemony, but not like lemonade, and again it's only a mild resemblance to lemon.

The drink is manufactured by a Japanese company called Otsuka Pharmaceutical Co., Ltd however the bottle pictured here is the South Korean version which references a Korean website. The choice of the name is quite intersting and whilst it may not be that appealing to westerners it certainly is targeting the right audience, ie. people who sweat. According to Wikipedia, the word Pocari translates to, "like a cloud floating in the sky" and means something like lightness or buoyancy.

It's most closely related to the drink Calpis reviewed earlier by asianbev although it's not milky like Calpis/Calpico.

As a sports drink it's got the right stuff in it to replenish the lost nutrients in your sweat and the flavour is quite enjoyable. It's not the sort of drink I would have regulalry, but definitely if I've been exercising it's appeal increases.

Weirdness (6) for the name