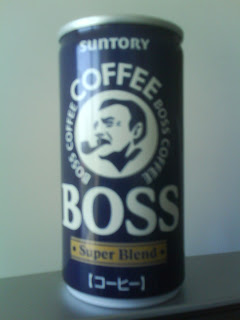 This is probably my favourite brand of coffee in can. Super Blend is a great coffee, full strength black with just a touch of sugar. Although I do prefer a dash of milk too, (I'll hopefully track down a BOSS Cafe au Lait at some point to review).

In the meantime, sit back kick up your feet and enjoy a soothing koohii (coffee) experience. This mighty little can delivers the caffeine hit you desperately require, there's no messing about. The coffee is full flavoured and rich and is probably about as good as coffee gets straight from a can.

The can features a prominent logo of a refined gentlemen smoking a pipe, the look in his eyes is that of a man who's taken charge of his life and succeeded, the Boss. He's done the hard yards and deserves his Super Blend coffee.


As asianbev mentioned before, coffee wars in j-land are as fierce as cola wars in the US and elsewhere, so it's good to know which one to get. BOSS coffee is brewed by Suntory of Japan who have a reputation for quality liquor as well. You may have spotted Bill Murray doing a stint for Suntory in the film "Lost in Translation". There's a clip over at dorinkuTV, hover over the video player and select it from the playlist scrolling at the bottom, there's also a BOSS Coffee TV Ad for your enjoyment.

Suntory offer a range of different coffees and I hope to take a look at some of the others in the future.