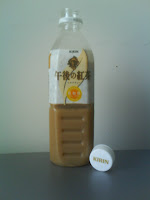 This was an enjoyable milk tea beverage, it was refreshing and mellow and didn't taste artificial or cludgy like other milk teas. It tasted like milk tea should taste.

The drink is manufactured by Kirin, and the bottle contains quite a large amount of tea (500ml), and my only complaint if any would be that it was hard to drink more than half in a sitting which could be inconvenient if you're on the go and don't want to carry a half bottle of tea around. However in my case, I was greatful for that extra half when I woke up with a hangover this morning.

The tea flavour is quite mild, and it might have been better if it was a stronger brew, also the amount milk seemed inadequate creating a slightly watery taste. Overall though, if you're looking for a milk tea this is the best I've had so far. There's a review of another milk tea by asianbev, have a look for an alternative take on milk teas.

Update: The feeling of wood in milk is drinking tea..