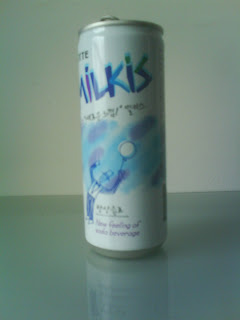 We've done a couple of reviews (and here) of this drink before, so I won't carry on about it.

You may or may not have ever left a carton of milk to its own devices, but if you have and you were unfortunate enough to try and drink it, you'll notice one of two things, it's either gone lumpy and/or it's got a fizzy taste to it. It's the latter of these two things that Milkis more resembles. It's a fizzy milky sweet drink with a rather bizarre slogan, "new feeling of soda beverage" - they got that right... fizzy milk is a new feeling, unless you are one of the unfortunate ones as outlined earlier.

Don't know that Milkis is really my cup of p1ss, but some people seem to enjoy it enough to buy a six pack of the orange flavoured version...