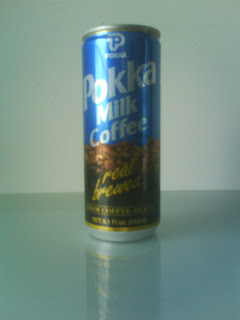 This drink, or at least one very similar to it, was reviewed earlier by asianbev. As you can see the can pictured above is quite different from the one asianbev reviewed, but it would be hard to believe that Pokka would make two different versions of canned coffee and use the same slogan "Real Brewed" on them.

The coffee was quite mild, however it had an authentic coffee taste to it, not too sweet, and thus the 'real brewed' slogan has some pull to it.

Personally I can't get past Suntory BOSS canned coffee and am yet to review the milk coffee version of that drink.

However as far as canned coffee from Japan or anywhere else in Asia goes, this one fares well and would be one I would drink again in lieu of BOSS.

There's a lightly amusing yet not necessarily related coffee animation at the Pokka website showing the evolution of the character featured on the alternative can who seemingly has aged along with the coffee over the years, see it here.